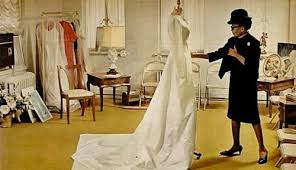 Following on from the previous article Black Women in Fashion https://coralturner.com/black-women-in-fashion-a-portrait-of-dressmakers/ I would be remiss to not write about Ann Lowe, an American Designer who dressed one of America’s First Ladies, Jacqueline Kennedy. 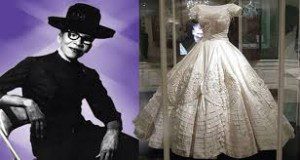 Ann Lowe described by Julia Faye Smith in her book ‘Something to Prove’  ‘America’s Forgotten Designer’ I echo that sentiment.  I first came across Ann Lowe’s work in 1999 at The Black Fashion Museum in Washington DC on display were day and evening gowns, made with her signature handmade fabric flowers, the dresses in pristine condition, the fabrics vibrant in colour and detail.

Ann Lowe born in 1898 Clayton Alabama USA the Jim Crow South, a time frozen in prejudice (that’s putting it politely) segregation laws rife, life was already fraught with obstacles for this young starlet.  Ann’s mother, Grandmother and Great Grandmother were expert Seamstresses their skills being passed down to each generation Ann would later follow in their footsteps.  I see this part of Ann’s story as heredity in the making; I think of my paternal Grandmother a renown dressmaker/designer, as a child I unknowingly pick up the baton, or in my case my Singer treadle sewing machine!

Anyway, back to Ann; in 1914 tragedy struck, Ann was 16 years old, her mother Jane Cole Lowe became ill and died, at the time her mother, Grandmother Georgia, and Ann were working on an order of 4 gowns for the wife and daughters of the governor of Alabama.  Despite her grief Ann paid homage to her mother by completing the order, much to everyone’s delight.

So think of the time in which Ann is living, the pain of grief, your mother, grandmother, and great grandmother handing you the baton to continue building upon the legacy.  Ann already has a passion for the artisan craft and decides she is going to become a Designer (I can feel the fanfare of ta-da when you introduce a revelation).  Ann was building a reputation for herself with the wealthy elite social set but wanted to expand on her education.

It’s now 1917 Ann travels to the Design School in New York City, the director of the school had only conversed with her through correspondence, assumptions were made no doubt, as he was not expecting a black woman.  However, on her arriving at the school he did not send her away, the students of the class were not so generous, they refused to study with a Negro; Ann segregated studied alone in a separate classroom. Neither the teachers nor the students thought that Ann would have a place in the world of fashion, little did they know what lay ahead, don’t you just love the way karma slaps some people upside their head!

The irony, whilst alone and segregated Ann’s work was used as an example of craftsmanship for the other students, even more ironic is that Ann completed the 2 year course in 1 year.

I fast forward moving beyond Ann’s home-life, to her business in New York, Ann is not only dressing society’s elite but Hollywood stars; Olivia de Havilland wore an Ann Lowe gown to receive her Oscar for best actress in 1947.  Yet the disgrace was Ann Lowe was not credited for having designed and made the gown it was cited as ‘unknown’.  I know, don’t get me started!!

Ann had met with Christian Dior in 1947, from what I have gathered they had a mutual respect for each other’s work, with parallels and huge disparities in between.  Whilst the press concentrated on Dior, Lowe would continue to forge her own path singlehandedly.

There are commissions for designers work that change the trajectory of their life path, wedding dresses have made household names of many designers, so you would have thought that designing and making the wedding dress for Jacqueline Bouvier-Kennedy would have provided Ann Lowe with such status and accolade.  With the exception of one, society editors worldwide made reference to the dress not the designer, editor Nina Hyde of the Washington Post however, would credit Ann as the designer and maker for the Jaqueline Kennedy wedding dress.

Cashflow is the life force of all businesses and Ann Lowe’s was no exception, some of her clients would not pay her the agreed amount on completion of her work, or just not pay her at all.  She would often undercharge for her labour, her love for the craft being a primary factor, no change there then, how many creatives from artists, designers, sculptors so the list goes on are still doing that today!   Ann’s son Arthur was responsible for keeping his mothers business afloat.  Arthur was later killed in a car accident, the loss of his accounting skills at the helm of his mothers business had devastating financial consequences, Ann’s atelier was now spiraling out of control.  The IRS would pursue Ann for $12,000 in back taxes in 1961, a whopping $103,479 in today’s money.  They seized her business, and closed her atelier, at this time Ann’s eyesight was also failing, it rained and then it poured, then the sun shone through in the form of an anonymous benefactor having paid her back taxes!

Despite this aspect being cleared there were still other debts, in 1963 Ann filed for bankruptcy, now Ann would use her skills and work for others, and produced designs for Saks Fifth Avenue as well as selling private designs to Neiman Marcus and others all this with her eyesight decreasing.

In 1965 Ann opened her atelier again, talk about tenacity ‘Ann Lowe Originals’ on Madison Avenue; Ann Lowe retired from her love of the craft in 1972, due to her failing eyesight.

The challenges Ann Lowe faced are head spinning, whatever your trade or profession, this has to spur you on.   Ann was resolute in her decision that she was a fashion designer, that’s how she referred to herself, despite the social climate and lack of media attention. 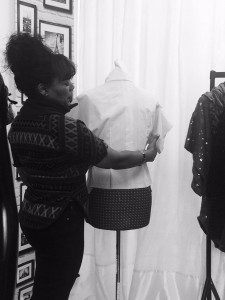 History continues to shine on those whose talents and contributions have been hidden in the dark, Ann Lowe inspires me today and everyday, the world of fashion is slowly waking up, but who’s got time to wait or waste, not I for one!

To learn more about Ann Lowe, Julia Faye Smith has written a detailed biography titled ‘Something to Prove’ http://amzn.to/3oznSuq.

To view Ann Lowe garments which I viewed at the Black Fashion Museum DC back in 1999, I have learned they are now part of the National Museum of African American History and Culture https://www.culturaltourismdc.org/portal/black-fashion-museum-african-american-heritage-trail. 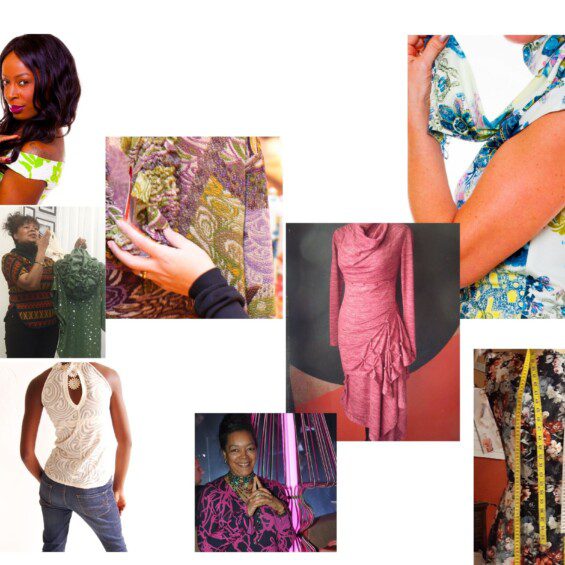 What is Individual Style?